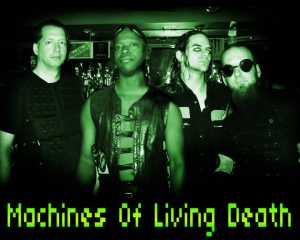 I open my arms to new friends and old vices as I walk into the Fallout for the second time this week. The stage is packed with an impressive array of drums and I’m thankful for the earplugs I’ve bummed off a man outside.

The humanity on display runs the gambit from punk rock to goth to cyberpunk to a few out of place looking souls who’ve look like they’ve just stumbled in from the mall. We are all a little worse for the weather outside nursing running eyeliner and slightly deflated hair. The harrowing rain from the three hour drive up is fading in my brain replaced by vodka and Statiqbloom played loud. I find more than one person who’s also made the drive, but have planned on staying the night.  I laugh a little too loud and a little too long–I’ll be driving back tonight and the thought makes me a little giddy as I talk.

Machines of Living Death takes the stage amid light and smoke.  Let me try to set the scene for you–the stage is packed with enough gear that the band has what looks to be about five feet of space.  The drummer seems like he’s perched amid his drums, with a laptop on one side and large monitor in front of him.  He’s not a small man but is dwarfed by the sheer expanse of drums around him.  To my right (nearly in front of me, as I’m perched in my favorite spot), is a man with a guitar, gas mask, and another laptop.  He is faceless and almost serene before the music begins.  I’d seen the lead vocalist before the show because it’s impossible to miss someone who’s wearing lit up LED shoes and UV-reactive facepaint.  He stands and grins too wide, as if he’s considering eating someone.  Their commitment to the theme is intense.

There is no slow, timid build up–he wastes no time growling and head banging, a flurry of hair and activity. Lasers slice through the fog as the guitarist frantically fights his instrument. The crowd feels under prepared for what this band from Baltimore has to offer.  Each song is matched with a video projection on the screen before the drummer.  I almost miss it, so fascinated and drawn in am I by the men before me.

The drummer bears out a a steady driving rhythm as the lead screams out WE TRUST IN RAGE. They are lit from behind in smokey silhouettes with a stone giving the impression of stop motion mannequins.

As I do, I download their most recent album and promise to spend time with it once I can hear again.

M.O.L.D. tears down as quickly as they can, like peeling back the top layer of a wrapper to reveal what’s underneath. As they complete their work more men move to the stage untangling the gear that Heretics in the Lab will require.

Five men weave themselves into the space provided on the stage each finding their station and testing the sound.  The crowd presses closer to the stage and the band takes it as their opportunity to thunder and scream.

The lead takes advantage of the lack of stage division to step into the crowd and pull them directly to him. He seems as if he would roam through the whole venue and scream to each of us in turn if not leashed by the mic. 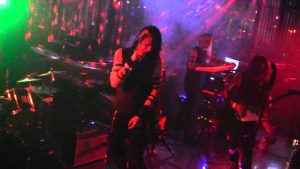 They are well practiced, smooth and incite motion from the crowd who move as if driven. The Heretics here have found willing participants in their frenzy. More than one person knows all the lyrics and mouths along in rapt attention.  The songs have a rise and fall to them that is hypnotic, hitting driving sections that fall away to near-quiet reflection in turn.  It is a rocking, listing motion that the crowd imitates.

The stage is dark, punched through with red and blue etching each man in a cartoonish glow as they move and thrash. They look unreal like the sort of monsters you create in the darkness when you cannot sleep.  None of them look quite real, or quite human.

The crowd is driven to restless frenzy again when the lead adds his guitar to the mix, standing in the crowd facing the rest of the band. They feed off the attention, demanding more.  I imagine if he gave them the chance, they’d swallow him whole and still beg for more.

“It’s the feel good hit if the summer–but not if you have kids” he says, launching into a languid driving beat that makes heads bob and hips twist. The chorus finds him alternately in the crowd or climbing on the bar. I lose sight of him in the smoke and light watching instead what I can see of the other men.

Their last song is So Far Away and it is the perfect driving send off.

The stage grows more empty more layers peeling away to reveal 3teeth below. They move with precision to redistribute items and re-purpose the space. It begins to feel empty as pieces of previous bands are stripped away.  They sort through the remaining cabling to ensure the least amount of space possible is used by anything unnecessary.

Alexis’s Geiger-esque mic stand appears from the shadows.  It is strangely out of place in the brick and metal that makes up the Fallout. Even more alien than usual, perched on a plywood floor like some kind of strange bird below the metal I-beams of the ceiling.  Next to me, a wide-eyed younger member of the crowd stares and positions himself to attempt a picture with the thing.

The crowd presses forward finding the edge of the stage in anticipation as lights are tested and the roadies begin to clear. There is no crazy entrance, no production before 3teeth.  They walk on stage as if they’ve always been there and we’re only just now noticing them.

Alexis looks out at the crowd, gauging us. I can’t read his emotion behind the signature mirrored glasses but hear bemusement in his voice as he asks who has a cigarette. The crowd roars EVERYONE. He takes a smoke and picks one of the several lights offered.

They fiddle with the monitors for long moments taking expressive drags off cigarettes.

When they truly begin, they are too big for the space filling it past comprehension and eating the limits that reality offers.  The man at the keyboard thrusts and lunges, one hand keeping his tied to the physical object he manipulates.  Flashing lights follow the beat, blasting into our collective eyes and leaving us for a moment blind.

Alexis steps into the crowd finding space between the smoke to move.  He is swallowed up as he passes from the stage and released in a wave as humanity parts to let him through to rejoin the band.  “This is cool–I can see all of you,” Alexis comments, prompting a scream.  He laughs, and I wonder if he is remembering the faceless crowds he’s perched in front of before.  Here, each member of the band can see the reaction he elicits from the crowd.  It is fed to him in out stretched hands and voices, close enough to touch. 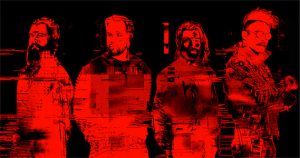 I think, if you gave action figures cocaine they would look like 3teeth moving through the stage.  I am so close and he is so violent and out of this world that I think each time he lunges forward, the guitarist may impale me on the neck of his instrument. Honestly, I think he would keep playing.

This is the house party your friend thought he was throwing in high school. This is the most intimate place anyone will ever see this band. This is a riot waiting to happen.

Alexis tells us this is an honor and that this is what the scene means. We drink every word and beg for more.  These are people who have driven hours to be here and who have to work the next day.  These are bits of humanity cobbled together from leftover days and eyeliner, begging to be seen and recognized.  I think now that we are seen and appreciated deeply.

The middle of the set, it finally happens–the guitarist rests his head on my chest though he is so deeply involved in the performance art that is 3teeth I’m not sure he even realizes I’m there. I pet him on the head because I’m not sure what else to do. Someone next to me laughs because when does this sort of thing happen?

Music and smoke and light starts to fade together.  Maybe it’s the sheer exhaustion I’m feeling creeping through–but no.  They are surrealist paintings in sound and light outlined in red and blue like a 3D movie with no glasses. They have moved beyond expectations into something beyond.  The music pulses around and through us, inspiring equal amounts of hip gyrations and head banging.  It is an controlled application of power.

This is the most ridiculous and amazing place to see this band. These are sharks in your swimming pool. These are lions in your garden party. These are raptors in your kitchen. This is your girlfriend tying you to the bed and setting your house on fire.

The intensity of the experience cannot be over stated.

Alexis turns his back to us and there’s a collective intake of air as we realize they are about to walk off stage.  He turns back.  “We usually do this as an encore, but,  fuck it.” They launch headlong in to Nihil, my favorite of their tracks.  Everyone in the venue screams the lyrics as they pulse around us.

And then just like that, they are gone, weaving their way free of the stage and through the crowd.

4,717 thoughts on “3TEETH, Heretics in the Lab, and Machines of Living Death at the Fallout RVA”