There are khakis sprinkled between the smoke and leather. A girl in fetish gear and fishnets stands next to a man drinking a bud light in a baseball cap that reads AUSTIN. It is unclear if he’s invaded our world or if we’ve thrust ourselves on his, demanding recognition from the entirety of Dallas.

Panoptikon ( http://www.panoptikondallas.com/ ) hosts the first event of Convergence 23 that I’ve been able to make. A combination of working and a delayed flight pushed back my arrival and I’ve missed the fashion show and other events. But, after settling into my hotel room and finding food, I’m ready to walk out and see what exists in Dallas.

I manage to catch the last few minutes of Lord Byron as I stand outside, working my way 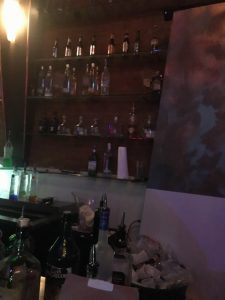 visually through the crowd. Back home in NC, I’d be a standout–the sides of my head shaved, straight bar laced Docs, and a Skinny Puppy shirt. Here, I’m woefully under-dressed. Each person is an explosion of expression, finding himself, herself, theirself in leather, fishnet, chrome, and paint. The tenseness that often follows these expressions of individuality has evaporated and I feel that we are all at home.

The club hosts a solitary pole on a platform small enough to be confused with a dinner platter. This is my world for a few minutes. The pole is just a pipe and not designed for the things I wish to display. I fall and hit my knee but I dance. The music throbs. The crowd around me is as lost in the waves as I am as Dan Von Hoyle’s set weaves around the crowd. 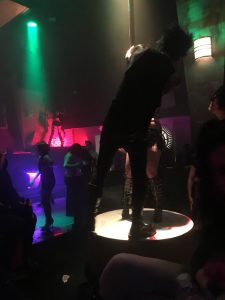 He plays several new songs, introducing them and enticing the crowd. Harmyjoy’s Silver Lining of the Mushroom CLoud is the first album of many that I instruct my iPhone to download.

I give up on the pole and order anther vodka cranberry.

I recognize bands from the allegiance declare on the chests of the crowd. I pick out common motifs in an uncommon people. I can’t always differentiate between tattoos and body paint until the wearer brushes against another and deposits a piece of their costume–a piece of themselves–on someone else’s arm.

As I wait for my drink, a man works up the courage to shoot tequila. His unstable hands betray that this is not his first and beside him another dark haired man gently goads him into the drink and they laugh. Together, they form a small oasis in the crowd. There are many of these pockets as people reconnect with friends they’ve not seen in a long time. I feel isolated as if I’m watching humanity happen around me. I imagine an arm snaking around the small of my back, a thumb casually hooked in the waistband on my leggings, a tug. That deep feeling of being connected, physically, to another person. I am buffered on all sides by ghosts tonight.

I see the remains of the emo kids, scene kids–bright spots amidst the dark colors that dominate Panoptikon. They hold hands and press themselves against each other. I pick out other looks–the cyberpunk, a Lolita, more steampunk than you can count…the occasionally normal human who looks as if he’s stumbled into a cave of monsters and is surprised to not be eaten alive.

Shriekback’s Nemesis https://www.youtube.com/watch?v=6bMM61Y5CEU comes on and everyone stops to throw middle fingers in the air as they scream the lyrics. A man stops, makes eye contact and begins the Macarena. It somehow works and I find it contagious.

It is a good start to the weekend.