I walk into the Church and it smells like vanilla. There’s a stand with bath bombs to my left suggesting bathing in the  blood of your enemies. Masks, leather, crazy hats, impressive jewelry–everything is represented in various degrees. The common motif is darkness and skulls with a smattering of adorable.

I’ve dressed more appropriately for the venue this time, pairing a pentagram harness with a black dress and ensuring my hair is spiked high and hard. Dallas’s tall building form a wind tunnel and as I’ve walked there, I worry that turning to  the side would topple me as the wind met the unmovable mohawk I sport. 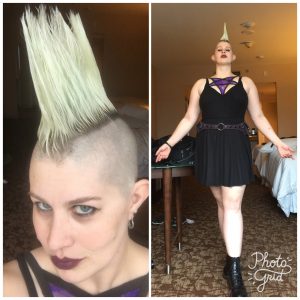 There are a groups of people gathered around tables, day drinking and reaffirming friendships. Several people I don’t know talk to me in that way that makes you feel as if you both know a secret and are skirting the edges of discussing it. The people selling bath bombs enthusiastically discuss them, instructing people to sniff the samples. They tell me that there had been samples in the bathrooms, but last time they checked, the cup in the men’s room was empty–concern that someone had eaten it was brought up. I asked who eats things they find in bathrooms, and they agreed it wasn’t that sort of club.

The other side of the room smells of musky leather, a dark scent surrounding masks the loom off the table. They are well crafted and strange. Someone picks up a small plague doctor and the crafter is thrilled that he doesn’t have to explain the imagery. Farther down, jewelry and hand tooled leather are on display. Each vendor is proud of the work on display
and wants to talk in depth about everything.

I lust after so many things but my bags are full of shoes and poor decisions. I fill my pockets with cards and promises to shop online.

Men are trying top hats on and I stop to admire them. Dan Von Hoyel and I talk for a while about top hats before he invites me to the workshop he’s doing at The Nines. His demeanor 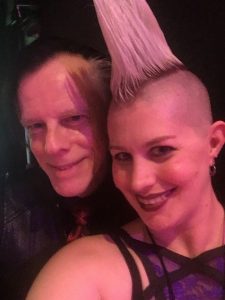 is quiet and intense in a way that catches me off guard and leaves me feeling a little unstable. I recognize this after a few minutes as the sort of person I have no ability to easily manipulate and smile, pleased with this discovery. We share a cab, Mexican food, and a common interest in consent and darkness.

The workshop is on spontaneous bondage and as I wait for the doors to open, I construct an idea of what this would be like. I know he has a model and I’ve talked with him for a decent amount of time. I imagine a technical demonstration with practical applications. Maybe a bit dry, but interesting.

I am, as I will be often this weekend, wrong.

Before the workshop begins, the crowd files in to fill plush red couches. He carefully dresses his model and himself–spontaneous may be in the title, but I feel there is nothing spontaneous about his purposeful preparation. She comes out and as I look at her, I get the sense of a kitten. She’s playful, willfully disobedient, and possessed of that effortless charm that makes you want to be her friend. She kicks her feet and stretches, presenting whatever limbs Dan asks of her with only the occasional teasing protest.  He rolls her and positions her without giving the sense that’s she’s just a doll or a prop.

“Are you okay with this?” he checks with her constantly. Dan never explicitly speaks about consent but demonstrates it by the care he gives his model. He teaches us how to check that the ties aren’t too tight and warns that there should always be a pair of bandage sheers around in case you need to free someone quickly “without turning the scene into blood play– unless you’re into that!”

It’s equal parts bondage, humor, fun, safety. He asks me to play the part of bedpost and I grip the fishnets that are tied (with a cat’s paw tie) around her wrists. She winks at me and I feel like she’s told me a secret. Dan asks her “how do you feel?” She giggles and extends a leg. “Great!”

We learn to frog someone’s legs using rope, ties, belts–I reflect that most of my belts do not have enough holes and I should invest in new ones–as well as some two column ties with bandannas and fishnets. Dan reminds us that someone should always be wearing fishnets just in case you need them.  He alternates confident real-time bondage with expressive demonstration, showing how fast it is to securely and safely render someone deliciously incapacitated.

Afterwards, the crowd shifts, new bodies coming in and music replacing ropes and belts on stage. 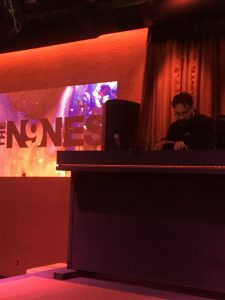 The promise was a listening party with a special guest–this turns out to be Frank M. Spinath, playing selections from Lion Hearts. The name, he explains to us, is taken from a children’s book. In the book, one of two brothers is very sick and he imagines escaping. The book ends with the brothers escaping via suicide. It is a dark book, especially for children. He describes the albums theme as the end of a life. It begins bright and colorful then goes darker. He promises to go there with us and I hold my breath for the breakdown.

The music is atmospheric, like lava boiling and rolling around. There is inspiration from Modest Muskorgsky’s Pictures at an Exhibition–my dad’s favorite album. In the piece, Muskorgsky flows one theme to another, reflecting the previous themes and combining them to seamlessly flow from song to song. Frank does this as well, pulling from the song you’re leaving and using that to make a path to the next song. He tell us that we must listen to it all in one go–it is designed to be heard as a whole experience.

He paints with beats and lyrics, showing us these dreams he’s had and dragging us to these places, not entirely against our will.

I crave this album from that deep broken place inside. It’s pre-order only and I’m not sure I can stand six more days without it. 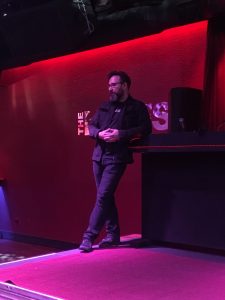 He indulges my request for a selfie, pairing my goofy grin with brooding eyes. At this point he foreshadows the rest of my night–“Make sure you’re at the Curtain Club for Iris! They’re very good.”

I laugh and tell him I’ll be there. He smiles brightly as I get the feeling I’ve just given him a piece of his favorite candy.

Before the night starts, though, I head back to my hotel to charge my phone. Dan and I walk together, falling into an easy pace despite the mud that’s started to encase downtown Dallas. We part at the elevator and I hope to see him again. 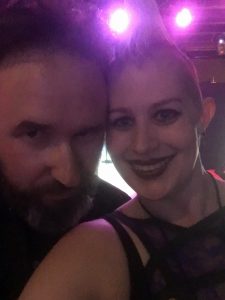