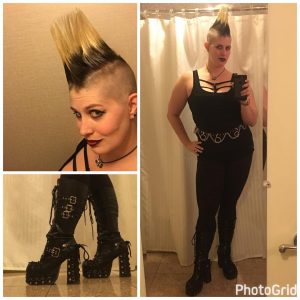 As you walk into Fallout, a sign advertises back shirts for $5 or “dress right in the first place.”  The lady checking tickets reminds each person firmly that no photography is allowed at any time, for any reason.  There was as one of the sound guys explained to us, a piece of sound equipment that “went ‘splodey” so the show is delayed by 30 windy minutes.  The night air is unforgiving when you decide not to wear a jacket.
Filing in past the black lights and drapes, we find our places in the long room–a heavy bar anchors one side, with watchful bartenders,eager to fill glasses, laugh, dance, and add to the restless excitement.  I’ve driven up here to Richmond from Raleigh over the course of about three hours and I know no one.  Yet, I feel at home.
There is a man in a suit and tie with his arms around a girl with bi-colored hair and facial piercings . There’s a man wearing only skin, his pierced nipples on display. “Satan is waitin” a bartender’s shirt reads. Side shaves and winged eyes rule the night on all genders. Smoke lingers in wisps around painted lips–I’ve forgotten how heady the collection of smoke that never quite dissipates is in a smoking bar and for a while I find myself lightheaded. I have made friends with a half deaf girl and the boy she drags around. A man with poorly laced Docs. Dreads. High boots. Low shirts. Maybe I’m already a little drunk but I love them all. I see a hundred stories play out on their faces as they drink, talk, and the anticipation builds.  I don’t know it yet, but I will meet two men from this crowd tomorrow in a coffee shop and become fast friends.
The stage before us–if you can call it that–is a barely recessed square defined on one side by a thin bar and stools, the other by a brick wall, the third by a dance cage, and the fourth is open.  I am uncomfortable at first because I’ve never seen a show like this that wasn’t something impromptu.  This is a calculated move, tearing at the definitions between performer and viewer and drawing you even deeper into the music in front of you. 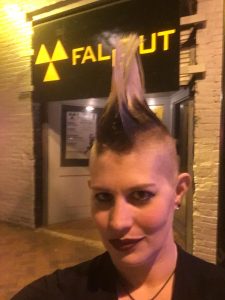 Nyxx is a tiny dark creature in plaid and smoke as she performs. She fills up the stage and becomes the center of everyone’s attention as she sings and moves. She’s impressively compelling and the crowd has to look at her. They have to make eye contact.  Like a industrial version of Medusa, she seduces everyone and turns us to movement–her version of stone.
She laughs at us standing in an awkward semicircle as if we were trying to give her space.  She invites and draws us to the very edge of the stage area and sings to us, eye to eye.  She finishes her set and is pleased with herself as we beg her to stay for one more song.  I’m impressed and buy her EP while the crowd recedes from the stage and towards the bar.
Solar Fake comes out hard–I feel the need to mention my Mohawk is higher than André’s as a point of pride though his eyeliner is better.  He aggressively jabs at his keyboard as if the volume is controlled by his force.  Sven follows, wrapping his hands around the microphone and entangling his fingers in the cord.   I am entranced by their hands, their bodies as they move and create. I feel them more than hear them as as André pounds and thrusts as the keyboard and Sven leaps around, their energy channeled but not contained.  Sven paces, each movement a run up to his voice unleashing.  The volume and depth is almost shocking in comparison to his small frame–he’s a powerful singer and masterful artist.
André reacts to the music like an animal chained, pulled by the keyboard and held in place. He is the hype man and demands from us tribute–a scream, a clap, a reaction. We offer this and more–they give, and we return back a piece of ourselves. I add their most recent release to my phone. They have made me feel like I already know every song by heart.
Nearly every performance is worth seeing. From nearly every one you can pull a reminder or thought or attitude or a wisdom that will push you as a performer to be better or more fully realized. Here I have distilled: fill your stage. Surround yourself with people who believe in you more than you ever could alone. Have a smoke machine. And a silly hat. (I add this last part later, as Aesthetic Perfection takes the stage.)
Lights, smoke, the smell of gingerbread from a nearby vape. We press forward, anxious.  The crowd knows that something is coming, and the air reminds me of the hazy hours before a hurricane makes landfall. There is nothing keeping us from the stage but self control and even that is fading.  Through the spotlights and smoke, figures that should be human start to distill as Aesthetic Perfection begins to appear in front of us.  There is a sharp intake of breath from the crowd as Daniel Graves materializes in front of us: a statue birthed of light, shadow, and force of will.
Daniel is at once Elvis and himself: a showman, an icon, a force. He is all that exists and you feel that he is the only source of the sound we hear–the truest expression of “control the music, do not let it control you” that I have ever seen. Everything bends to his will as he moves across the stage, weaving in and out of the smoke.  When I instruct my dance students, I tell them to use their hands to draw attention and he does this masterfully, grasping at handfuls of air and pulling it (and our attention) to himself.
He freezes with the music, a hand outstretched towards the crowd and we scream. He smiles, pleased with our reaction and we screams again tribute to our current god.  He touches a girl’s hand and I am over come with envy. She turns to me and we brush fingers, laughing.  She knows every word (this is her second Industrial Pop Tour show in three days) and they pour out of her.  She reaches for him over and over, rewarded occasionally with his attention.
The energy is intense in the room, and I am pleased to be on the edge of the stage, pressed in on all sides by excitement as the music rises and falls. Back lit, we can see the men behind the drums and keyboard as silhouettes perched amid metal cages that serve as playthings, not traps.  Every inch of everything on stage is a prop and he uses it–creating angles, brushing the brim of his hat, throwing his jacket open and closed.  He falls to his knees in front of us and still manages to tower over the crowd.

“My greedy heart is hungry, I’m not satisfied,” he sings to us and we echo it back, one with the music. There is no individual only the sound spilling from all of us.  He pulls out a microphone stand for Love Like Lies and can’t stop caressing it. It’s an odd island in the set as the music moves around him and he is tethered.  The restriction that this enforces adds a new dimension to the song as he sings “I don’t feel like myself at all.”

My highlight of the set is when he points and reaches to me screaming “my dear, you looks so good–good enough to eat” and I would be devoured.  I have always craved attention and to have it delivered is intoxicating.

There’s a moment where he takes the time to hand water to both the guys behind him.  It is a small motion that feels a little out of place and kind.   He may be all that exists for the crowd in front of him, but he feels keenly aware of the people behind him. Later it’s shots all around.

The lights go down and they vanish–reappearing moments later as shadows playing in the dance cage.  You have to imagine they saw it when they came in and wanted to climb the bars.  Someone hangs from the ceiling.  “Do you think they want another?” Daniel laughs in the darkness.  Egged on by the bartenders and Jackie, the owner of the venue we respond, laughing, yelling, begging.
As the opening bars of “Spit it Out” start, the crowd explodes with movement. We scream back at him matching as best we can the enthusiasm of a mad man. He exists as a maelstrom, a hurricane, a force we can name but not define. The crowd is swept up in him and reacts as an animal whipped into a frenzy. Tomorrow we may be human but tonight we are animals driven by a storm.  The silence afterwards is as oppressive as a vacuum.
I find him after the show and thank him with my customary overshare, the events of my life over the past few months spilling out of me. He smells like spices and gives the sense of warmth as I talk to him–not the fire that blazed before, but a cup of tea in your favorite mug. Comforting, familiar, real and I feel important. He will see a hundred more faces tonight as he moves through the crowd and I think each one will have this moment of their own.  Sometimes when you see a show, it puts all the music from a band into context and tonight has done that for me for Aesthetic Perfection.  I feel like I understand finally and I am pleased with the discovery.
**Author’s note: photography was strictly forbidden, so there’s no post-show selfie or concert shots.  Set lists may not be exact.  I drank a lot of vodka cranberries. 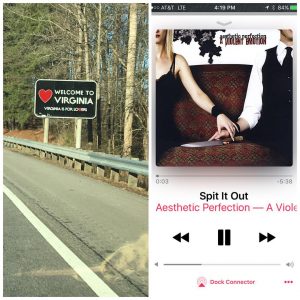