I walk into Tommy’s Pub—country music spills out of the speakers, flowing over the smattering of regulars in stained overalls and camp caps. Dale Erndhert and his son watch over us with kind eyes as the bands begin to install themselves in a small nook near the bar.

Country music continues as the ratio of camo to eyeliner shifts. There’s a tipping point, and the music fades to The Orgy—the bartender’s best guess for us. She’s not far off. 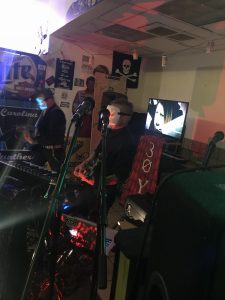 30 Year Sick  takes the stage with each man anonymous in a light up mask as he applies himself to his work. Chad a classic burst of energy; never still as he lives between keys, computer and guitar while his partner plays a stoic straight man.  The music that spills from them is pulsating and pulls everyone in the venue to stand near the stage–everyone is moving because the music insists that we never be still.

Niroc  howls at us from a monitor behind the men her voice like rich caramel, anchoring everything.  Even though she’s not physically present, she is a vocal powerhouse that sends a shiver down my spine.  There is a desperation to her voice that resonates deep within me and I can’t help but take a step forward. 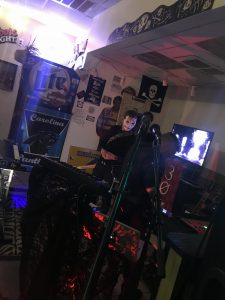 They continue to play, a forceful sound that fills the venue and draws the crowd to move even more, hips rocking and heads bobbing in time as music surrounds the crowd and swallows us willingly whole. 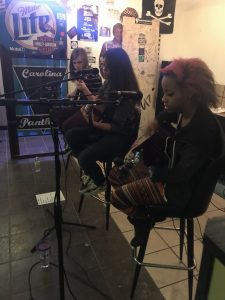 The next band is Death of August and they perch on stools, like little birds laden with acoustic guitars and a bass—a change from the heavily electronics of the first band. Each girl holds her own, fingers flying across the strings of her instrument weaving a complex, practiced tapestry of notes and deep, throaty voice.  They explain they’re looking for a drummer, but enjoying preforming as an acoustic set.

The stage fills next with Solemn Shapes, forts of keys and stands woven around a set of humans. 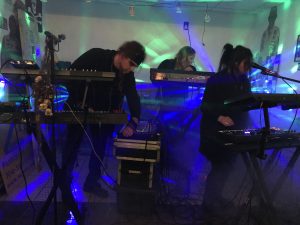 As they begin to play, light slices through the smoke creating a prism they seem trapped within. The music that escapes is dark and moody, raising the hairs on the back of my neck   The exquisite feeling that something is creeping up behind you permeates the bar and I find myself glancing over my shoulder at every breeze.

I find myself more than once holding my breath, waiting for the next phrase in the music in deep anticipation as they play, a delicious feeling that draws me farther and farther into their fantasy soundscape.  Scott later shows me a new shirt design, dripping silhouettes rising from strange water, and I find it deeply fitting.

They finish the set with a dancey number that still echoes the creeping hyper alertness of their previous songs. “That was awesome,” the man next to me gushes, and I have to agree. 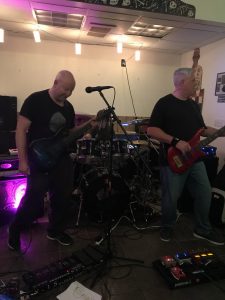 No More People packs on to the stage, filling it past capacity with boards, drums, guitars, and humans. They are the only band tonight with a live drummer and he fills more than half the allotted space.

The bar is too small for the pulsing sounds and personalities on the stage, filling to overflowing with each as the play and banter.  The music feels like a car being driven too fast down a mountain road—loud, fast, out of control yet you and ecstatic to be along for the ride.  They banter and laugh, clearly among friends and at home on the stage.  The drummer is quick to punctuate jokes and makes the entire performance feel like it’s the best jam session you’ve ever been to. 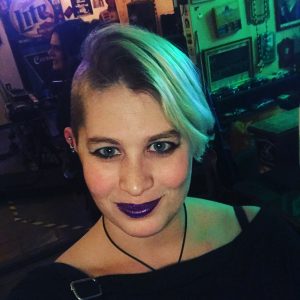 The night is perfect, and we find ourselves by the bar, drinks in hand after the sets are done and the equipment is being loaded.  I clutch my trophies to my chest–pins, shirts, stickers, music–and reluctantly move towards the door.  Despite offers of a couch, I have a long road ahead to make it home.  Luckily, I have a Ghost in the Barn (30 Year Sick side project) to keep me company as I travel. 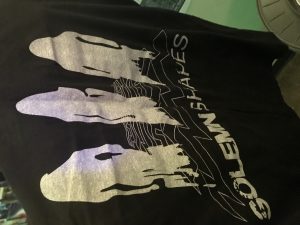 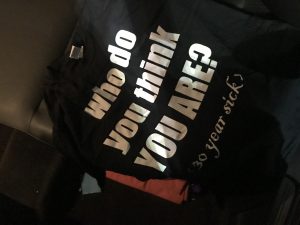