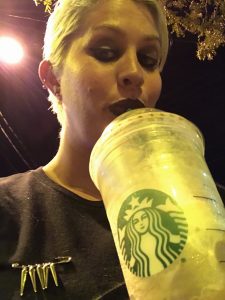 Richmond, I find, has no trash cans.

I stand outside Fallout with my empty Starbucks feeling self conscious as the ice melts and I look for somewhere to throw it away. There’s small talk as we wait for the doors–we are shades of black against the gritty backdrop of downtown Richmond as we bandy about the shows we’ve recently seen and compare them to early incarnations of bands who’ve been in the scene longer than I’ve been able to talk.

Someone presses a Strap On Halo sticker into my hand and I take it gleefully. “Who doesn’t love stickers?” Marc asks, smiling. He’s charming and delightful, joining in as we chat. I realize I’ve never bought a sticker in my life; only had them passed to me like love notes in a classroom. Talismans from bands who need my affections.

The stage is well lit for the moment and set in layers. A drum set and keyboard are pulled to the front, waiting for humans to bring them to life. Behind them, more instruments wait their turns with a patience I do not know.  I’ve driven almost three hours for another hit of Adrian H and the Wounds–memories of their impressive set in Dallas bolstering my resolve.

The titular main character of Adrian H and the Wounds is dressed in all black, his shirt split open almost to his navel. I have to look twice–he’s wearing a shoulder holster, empty. Adrian looks like a displaced 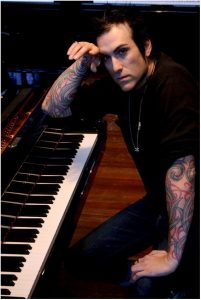 character from a foreign western channeling Nimoy and Eastwood as an effortless whole. If I was not previously intrigued, I am fully so now.

He and his drummer Doug pace and banter among themselves, the final precursor to the sound that starts to rumble around them as he presses his lips to his mic. There’s an element of horror; a creeping skulking feeling that raises gooseflesh on the back of my neck as his hands find the keys among the rolling sound. He braces; preparing for the sound that grows to fill the space.

Cookies and Cocaine is the perfect intro, an explosive outlet for both men as the drums thunder and his voice erupts. The drummer smiles, clearly pleased with his own performance. He is at turns frantic and gentle, coaxing sounds from each beat.

Our main character in this dystopian western rolls up his sleeves for That Hurts, revealing swirled tattoos on his forearms. His fingers reach across the layers of keys in front of him–if musicians are my vice, boys with they hands on keyboards are my guilty pleasure. He collapses and pulls forward at turns and I think this is a key ploy point, a gun battle, a moment of character development. We find he is not, in fact, the hero before we are swept away again in the sound and movement.

The last scene is loud, raucous, and I think it is a bar brawl and a gunfight–I think none of us leave this alive as a final cacophony of sound rushes outward to consume us.

The stage clears for Strap on Halo, looking impossibly large as men hang guitars from their bodies, anxious in their preparation.

Layla steps forward through the smoke and throws her voice clear and loud across the venue. Multicolored lights explode behind the three as she pulls the mic to herself screaming for the attention the crowd is glad to give.  They’re old school goth, with driving guitars layer beneath the haunting voice of their lead singer. 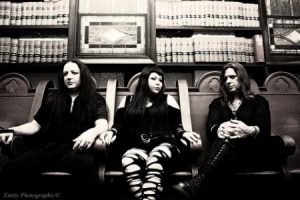 The men beside her apply themselves to their craft as fully absorbed in the guitars as the crowd is in the performance. They cast shadows as they play alternating blue, green, red. The effect is a deranged circus; she the ring master and they her long haired tigers, nearly trained and yet still wild, pacing around her as she sings.

Each song comes with an introduction, her speaking voice seeming so small compared to the undulating waves of her vocals as she sings. Each note erupts from her, flung out to the crowd they sway and dance, fully enthralled to the band before them. It feels as if she sings from a place far away and draws us there, a black clad pied piper.  The crowd is ready to follow her, swaying into whatever darkness she has for them.

She grows more animated with each song, matching the energy of her powerful voice and mirroring the rolling crowd in front of the stage. “Two more!” she warns us, animating as the guitars pick up the riff.  The crowd pushes forward, a little closer to the music that drive them to dance.

Strap On Halo’s last song is motion and light, mingling with Sean and Marc and Layla as they preform, pouring themselves out on the stage in front of the crowd desperate to drink them up. 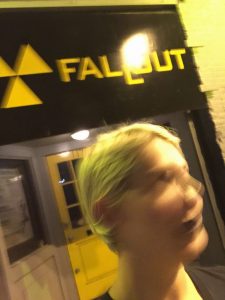 Afterwards, I find myself talking too fast, words pouring out to Adrian. I buy a shirt–the only in my size on his table–and he hands me remixes. I’ve come here, as always, not just for the show and the spectacle but for the chance to reach out my hand and draw a part of the music back to me.  Outside, I see Doug and show him my spoils, clutched like tokens of affection to my chest. He pulls me back into the venue, finding another cd in the stack. Doug takes all three, orders them, and tells me to listen to them just so and they’ll get me home. Adrian offers the two older cds telling me they’ll help me survive the first half of my workday.

We are all huggers and I get my fill of contact from the pair.

Mark, my sticker provider, finds me again. His eyes are bright and he smells of clove and sweat. He thanks me for sticking around and I thank him for the show.  He is earnest and thoughtful, alternating drags on his smoke and speaking.

I step outside again, one of the last to leave.  I am glad I came, though I find myself desperate for the sleep I know must elude me for hours yet as I start the long drive to the place I lay my head. 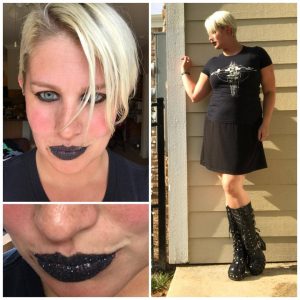 4,772 thoughts on “Strap On Halo with Adrian H and the Wounds at Fallout”