Skip to content
Lynyrd Skynyrd: Last of the Street Survivors Farewell Tour with Cheap Trick, 38 special & CJ Solar will be playing at Walnut Creek Friday, June 29.
The information below has been sourced from the BIO page of Lynyrd Skynard Website. For more information about this legendary band, please go to: http://lynyrdskynyrd.com/

The rock and roll powerhouse continually tours, this summer heading out on their second run with Bad Company. 2014 marks the 8th year for their annual Simple Man Cruise, a four day voyage filled with the best music in Southern Rock including an outdoor beach show featuring Lynyrd Skynyrd for the first time in the cruise’s history.

And so Skynyrd stands, “still unbroken.” “People may say, ‘they need the money,’ well I don’t think any of us need the money,” Van Zant says. “It’s just that we love the music, it’s bigger than the money, it’s not even about that any more. We have to make a living, sure, but it’s about the legacy of Lynyrd Skynyrd, and what it stands for, what the fans are all about. There’s nothing like getting out there playing a great show with Skynyrd and seeing people love this music.”

Adds Rossington, “We’re still standing, still keeping the music going. We wanted to do the guys who aren’t with us any more proud, and keep the name proud, too.”

With a catalog of over 60 albums, sales beyond 30 million worldwide and their beloved classic American rock anthem “Sweet Home Alabama” having over two million downloaded ringtones, Rock & Roll Hall of Famers Lynyrd Skynyrd remains a cultural icon that appeals to all generations.” … 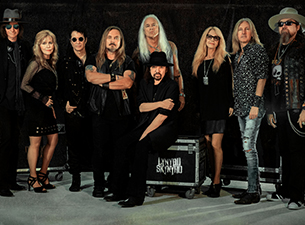