I really like these guys. Of all the tours/bands I cover, these guys feel like brothers. I’ve noticed that the openers they choose each year are always warm, gifted, loving and of course very entertaining. Don’t miss this one. See you there!

Dubbed Summer Traditions 2020 (a nod to the outdoor summer tour-circuit the band has done annually since 2006), Slightly Stoopid and fans alike will travel the states, sharing good times with one another through music and community as they have done since the band’s inception 25 years ago. This 2020 edition of Slightly Stoopid’s summer amphitheater tour kicks off in Eugene, OR on June 11th, 2020 and routes the beloved So-Cal band throughout North America, including Red Hat Amphitheater Raleigh on Friday July 17. Joining SlightlyStoopid for their Summer Traditions 2020 tour are special guests Pepper, Common Kings, and Don Carlos.

Fans gain first access to the artist presale beginning Tuesday, March 10th at 10 AM local at www.slightlystoopid.com. The local presale will run from 10 AM – 10 PM local time on Thursday, March 12th, and the general public on-sale will then take place on Friday, March 13th at 10 AM local time at LiveNation.com, the CEI Box Office at Coastal Credit Union Music Park, Duke Energy Center Box Office, via the Live Nation app, and Ticketmaster.

Formed in the mid-90’s by founding members Miles Doughty and Kyle McDonald, Slightly Stoopid has steadily risen to the top – always fostering their dedicated fanbase. Steeped in Southern California culture and armed with profound creativity and skilled musicianship, Slightly Stoopid is today recognized as one of the most successful touring reggae-rock acts in history. Expanding and evolving over the years to include drummer Ryan “Rymo” Moran, percussionist Oguer “OG” Ocon, saxophonist Daniel “Dela” Delacruz, keyboardist Paul Wolstencroft, and trumpet and trombone player Andy Geib, Slightly Stoopid has released 9 studio albums and 4 live concert recordings since 1995. Known for nurturing a “family” of spirited musical collaborators, Slightly Stoopid has hosted and guested with a slew of artists including Sublime, Ozomatli,  Karl Denson (Rolling Stones/Greyboy Allstars), Don Carlos, Chali 2na (Jurassic 5), Rashawn Ross (Dave Matthews Band), and many others.

Over the years, Slightly Stoopid has built a sweeping legacy for themselves, continuously expanding in diversity and repertoire. Warriors of the road, their touring has grown domestically and internationally, including sold-out dates all across the world, and festival appearances at famed events such as Coachella, Lollapalooza, New Orleans Jazz Fest, among others.  Twenty five years into the journey, the prolific collective has much to celebrate; the band founded their own record label, Stoopid Records, they created and curate their annual Closer to the Sun destination music festival in Mexico, which has sold out the past two years, and continue to explore (and master) the art of musical collaboration, most recently with such artists such as Bob Weir, Barrington Levy, G. Love (Garrett Dutton), the Marley family, Snoop Dogg, Cypress Hill, and more. 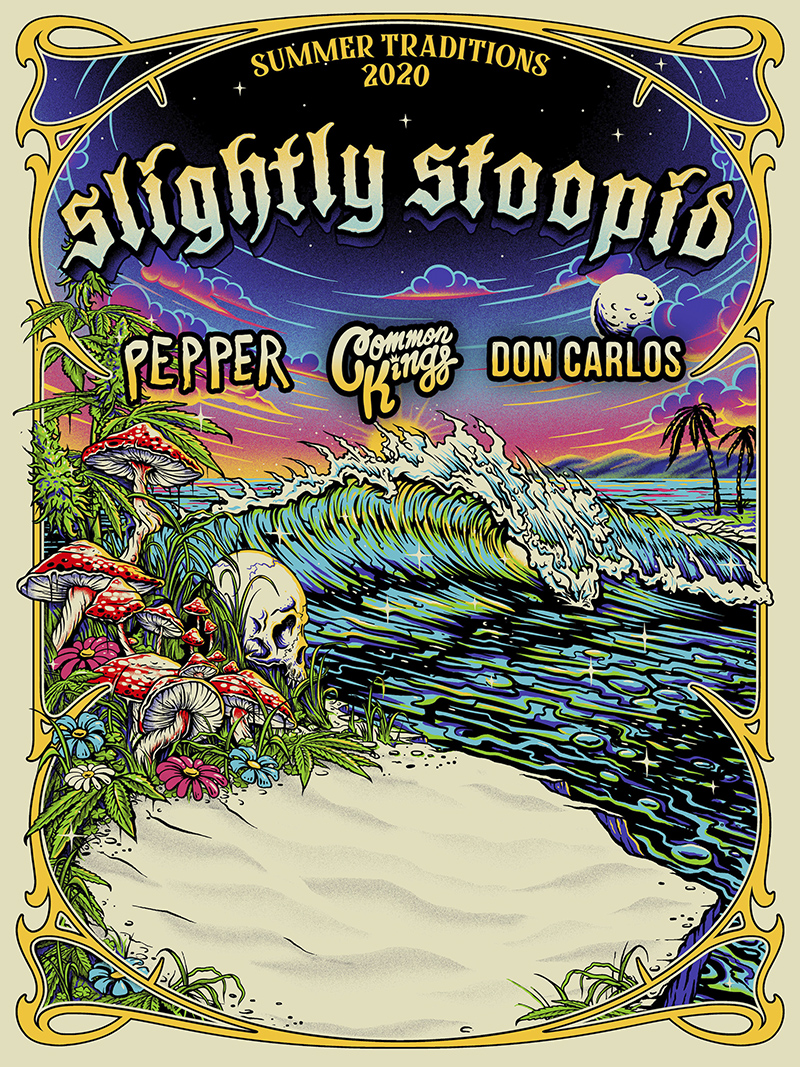