The night starts with the Uber driver dropping me off in front of a bar playing country music–purple mohawk and tight black pants.  More than one overweight middle aged man takes a suspiciously timed smoke break as I stand there, choosing between waiting outside The Maywood or indulging their curiosity at Trophy Brewing’s bar.  I choose to head to the club. 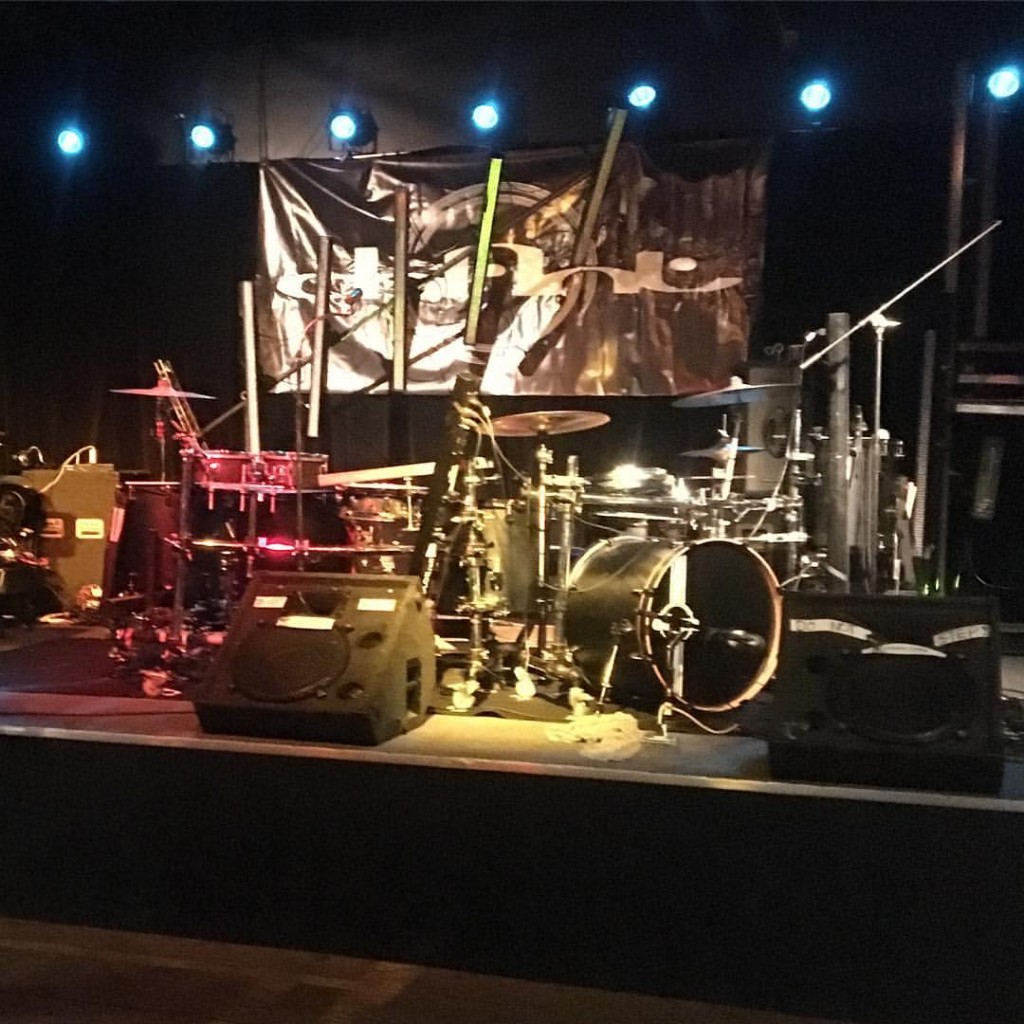 It’s not packed–there are more drums stacked on the stage than restless people in front of them. Despite this, there’s an electric energy that comes from having shaken hands, hugged, or taken a selfie with every person who’s about to be on stage. They know everyone’s first names and we know their story. The show has a deep intimacy and I imagine they are here for me and me alone.

Curse Mackey is up first–he cuts a lean figure on stage, with long fingers like spider legs working to board in front of him. He tells us he’s going to do some ‘live improvisational shit with vocal overlays, dub atmosphere weirdness’ and 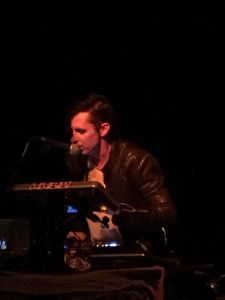 there’s a low hum. It shifts and changes as he moves, shaping sound like a potter shapes clay. There are staccato moments that pierce through and shake you to your core. He speaks in a singsong, imploring us “something wicked, this way please” using his hands as an extension of his voice to craft and shift the noise.

His set peaks as he steps from behind and moans “maybe you should have drove instead,” the lyrics echoing around like they are trapped, trying to escape. Music swirls and hums. Everything goes dark and you can hear he’s pleased with himself when he tells us CHANT is up next. There’s a deeply empty void in the club for long moments as Curse fades and filler music starts up.

I go for my third cranberry vodka and buy “Spider Sex and Car Wrecks” from iTunes.

CHANT takes the stage in darkness. The lights stay down and Bradley Bills tells us about a time that he saw an insanely intense small show on the border of Mexico and promises us the energy we’ve come to expect from CHANT.  We cheer. 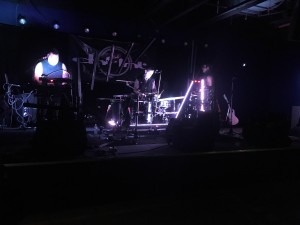 find him soft spoken so when the drumming begins, it’s electrifying. Each percussive beat of Adoration thunders through the club and the crowd. The stage is barely lit from below, and as the song progresses the light show begins. Bars of light with hundreds of individual LEDs light up in sequence, playing out complex patterns that dance with the music. Kris pounds at the drums and keyboard. Alvin’s guitars howl. Bradley screams lyrics and beats out complex rhythm. “It’s all for you–this adoration,” he tell us and I believe him.

The energy of the set stays impressively high including Bradley climbing on top of the drum set, inciting the crowd in my favorite song: Revolt.  “Today’s the day for a revolution – there’s no escape – you’re all coming with me!” He reaches out, pulls us in–and I’m ready to go burn everything to the ground. “Revolt, revolt, revolt!” I yell back. 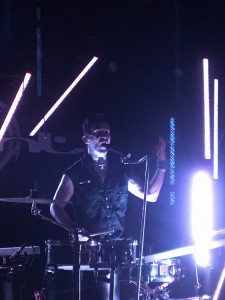 Curse joins them on stage–he and Bradley turn the songs into a push-pull, alternating lines and thoughts seamlessly. “Create to destroy,” one sings. “Destroy to create,” is the response. The pieces fit together perfectly and I think to myself that I’ve found religion in the primal, tribal energy emanating from the stage. 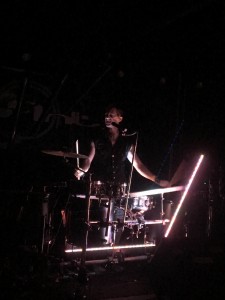 A new song and new lights follow–a red droplight becomes a focal point that Bradley uses to direct our attention and draw our eye. He demands our full attention and no one can look away. The song is amazing and engaging.  Everyone in front of the stage moves restlessly with and against the beat, some swaying, one guy looking as if he wanted to throw himself around and into everyone else.  Bradley moves around the stage and interacts with the leds–casting waves of white against the red background.

“I’m in love with your favorite sin,” they sing next and the club feels like a car crash.  The drums are filling the space interspersed with more electronica than before and harder riffs.  The energy in the club is peaking and everything pulses as people dance and thrash.

They finish with two more favorites of mine–Blood + Peace and Universal.  The first speaks deeply to me crying “the image of your scars will never fade–proof that you’ve survived your yesterdays.” It is an honest, haunting moment that draws me in.  The lighting is minimal, focusing your attention to pin point precision before exploding again to a screaming finish.  With a bare pause, the final song starts: screaming out “it’s just you and I together–at the end of everything” as a perfect conclusion from the opener’s promise. The lights drop and there’s silence, the absence of sound a black hole that draws your breath.

For the first time, I have the chance to really thank an artist and throw my arms around him, sweat, makeup, stage grime, and all.  It is an amazing, electrifying feeling and I think I could exist here forever.  I tell Curse I fell in love a little and he laughs.  I am high on sound, sensation, light.  Maybe a little drunk.

There are moments and experiences that sink into you and become part of your core–this is one of mine. 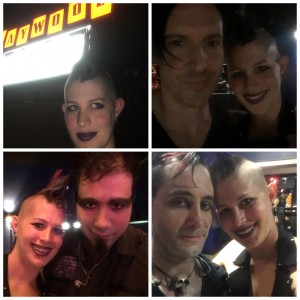