I make it in time.

There is a half hour of panic at the tail end of my three hour drive when I think the time has moved up and I’ll miss The Rain Within but when I walk in, Andy is in the middle of the floor, his effortless magnetism creating a small eddy in the flow of humanity in the Fallout.  I capture a hug from Mike as I walk past, pleased.  The club holds tight to its assembled samples of humanity, offering a respite from the chill outside.  It is that perfect sigh after holding your breathe for too long in anticipation: a comfort, a release, a start.  I find my way over the rough brick floor towards the bar and a vodka cranberry.  The drink swirls between my fingers, mimicking the the stage–full of smoke and light.

I find my favorite spot and lean against the wall as the men in front of me find their own/ places.  “You ready?” Andy asks, a conspiratorial grin on his face.  A moment of silence, then Andy explodes–jumping and reaching for us in turn, seeming to be barely constrained by either gravity or physics.  Mike is as always the perfect straight man to Andy’s antics, strong and steady but by no means lifeless–he is merely calmer than the tornado next to him.

“Murder me,” Andy seems to plead and I think this moment is why I fell in love with the band. This is my gateway drug to synthpop and synthwave. The first embrace that drags me down into the depths of electronica. 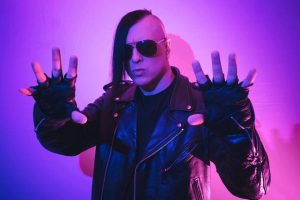 I find tears spilling over my eyelids and down my cheeks as he sings “we are one bright light/shining through the black of night/I will be there when you wake”. I wonder if all my favorite musicians will make me cry these days as they take off with Innocent (“it’s not about any of you,” Andy tells us) and I feel hot tears trail down my neck again.

The set completes with Silence and the Sea—I wonder what devil Andy sold his soul to for a voice like that as I search for another drink.

The stage is full of spoken word and a lie, rolling hum. More than one person presses earplugs in, unprepared for the auditory onslaught. Gost approaches, hooded, presenting a skull for our inspection. He places it in his semi circle of keys as if this is the last element to the summoning. His hands are claws around the mic stand, over the keys, pressed into his hood. 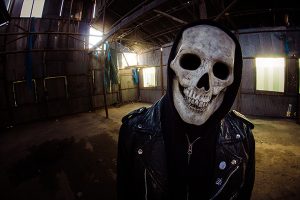 From the way he moves, you can almost believe the music is a product of his whole body. It is a nearly physical force and I brace myself on the wall lest I am pushed over.  The crowd is evenly split between the need to dance and the drive to thrash—each holding their space as the music crashes into us. I lean against the wall and feel additional vibrations shake my body. Sound replaces the space between my cells and I am engulfed and consumed.  My heart races with the music until I think both will explode.

I am enraptured and lost in the music of a man—a creature—I could reach out and touch. Last I saw him, he towered over me and looked down in Chicago. Now he is at eye level in Richmond and more powerful for it.

A harmonic lull and Gost again presents the skull for our inspection. We cheer at the talisman reaching hands high before he slams beats into our collected mass again. The next thing me he lifts the skull is the final and he places it as a crown before leaving the stage entirely silent.

The projector leaps to life, playing Mr. Sandman and asking for a dream before diving headlong into drums and skulls. The song and the scenes presented on the screen behind Dance With the Dead twist and corrupt, falling into a darker, harsher place with every beat.  The logo fades to a burning cityscape and lightening.

I find myself rocking and pulsing as the music careens around me. The crowd is infectious and rolling. Andy is next to me for a second and we both laugh–for a moment I feel human. In front of us the crowd press forward and piles with a life driven by the sound pouring over them. Well timed visuals and movie clips remind us “we are all animals, my lady.”  The crowd responds, throwing fists in the air and yelling.

I am overwhelmed by the crowd and sound, equally held in place and pushed around. It is intoxicating in equal parts to overwhelming and I retreat a safe distance from the sensation.

The music continues to through the crowd as the men move between the array of instruments in front of them. The men on stage move adeptly from instrument to instrument, changing ad often as the projector’s image behind them. It is a mad house of light and smoke as they dance.  There are two of them, but they feel like so many more members creating and weaving sound through Fallout.  The band creates a small phrase and riffs on it for a song—finding variations and additions that take it from where it was to a richer, more complicated version of itself before dropping back to the original sound. It’s is a rise and fall that pulls you gleefully along for the ride.

A woman has a light stick twirling and drawing patterns; I recognize the need to translate sound to movement and feel myself rocking again as the band mixes more classic horror samples with their sound–including a remix/cover of Master of Puppets–possibly my favorite song of their set.

When the music ends, it leaves a void in the place, a hollowness that is held for a moment before people begin to fill it with conversation.   I clutch purchases and friendships to my chest as we chat, finding solace in both before heading out into the night to begin the long drive towards home.

4,843 thoughts on “Dance with the Dead, Gost, The Rain Within at Fallout”