I sit at the bar in McCormack’s Irish Pub and order food as the soundcheck rumbles above us. There’s a classic Richmond bar mix downstairs, and I make friends with a woman next to me–she’s a journalist and beyond a love for words, we each recognize a deliberate and calculated wildness in the other.

Another beer in hand and I head upstairs, surprised at the space.  It looks like a scene from a post apocalyptic video game with an empty bar and stacked chairs herding the occupants through the narrow space to the stage.  I have worked almost nine hours, driven three, dropped off my car at a near-stranger’s house, and found my way here–exhausted, I find a seat and table to rest my body and beer on and hope for a good night.  I chat with the boys, their pre-show energy like sour candy; exciting and startling.

The Dr Orphyus Project starts with a single man before a colorful screen.  He is lit from below, the harsh white light giving his imposing figure more height and more stone-like permanence.  Beside him, there is a screen with a projected cartoon.  “Step right up,” it cajoles promising a 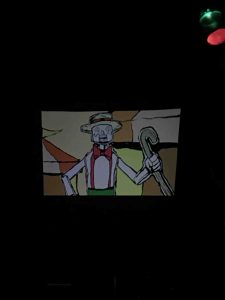 slew of delights and horrors.  There’s a rhythm that feels halfway between a carnival and a seedy jazz bar playing, winding around the venue like smoke and ghosts.

On stage, the man delivers, his eyes wildly intense in their focus as he manipulates both voice and guitar. Lit as he is  from below, he evokes horror stories around a campfire and the monsters within. He growls and snarls, forcing an impossibly intense sound that envelops everything in front of him.  Beside him, depraved cartoons continue, warping their realities over and over as he plays, occasionally interspersed with realistic figures in black and white. They tell simple stories, driven home by the beat and sound. The carnival continues, figures bleeding, torn apart, put back together, and rent again.

I haven’t even noticed the trombone until he steps to it, creating a new dimension in the rolling waves of sound. It rises above, floating and  hitting all the high places that the driving guitar 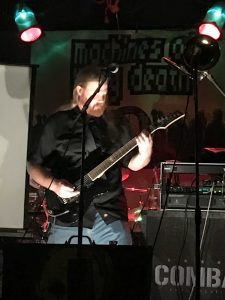 and guttural vocals miss.  It is a strangely melodic caramel swirl in the midst of the frantic, driven, intense metal.  I’m pleased to find he can actually play the instrument and am impressed at his ability to apply his lungs to both vocals and brass interchangeably.

I am thoroughly pleased and enthralled that the promise of sights to amaze has been fulfilled.

Machines of Living Death takes shape in on stage, Robbie and Tony are marked out as silhouettes against the monitor’s green glow and Matthews well lit drum set as they rearrange the set pieces and remove the remains of The Dr. Orphyus Project. They bustle back and forth, giving me the opportunity to make another beer run.  I install myself again at the table, joined by various people as they move around the venue.

As a group, we’ve pressured Robbie into wearing his “glowy shit”—shoes with soles etched in light and leds around his knuckles.  Each time his hands come to his face, the green glow is eerie and otherworldly. It’s a perfect installation into the sensory overload of lights and video wound around the trio.  Matthew is installed behind a drum kit that is interwoven with lights, fading 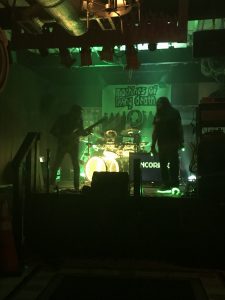 from color to color as the night progresses.  I have been looking forward to this moment for a week and the band does not disappoint, exploding into a wall of sound that shakes the floor.

“IN RAGE WE TRUST” he screams and the monitor echoes. This is the moment I remember first realizing the orchestrated perfection of this live set—it is a dance of light and sound and video that wants to grab you and drown you.   The pulsing beat of Chromosexuality traps me—it is my favorite of their discography—howling from in front of a monitor showing cyborgs peeling skin off each other. I’m alternately fascinated by the otherworldly, larger than life men in front of me and the perfectly edited videos behind them as they perform.  It’s intoxicating as it swirls around me.

I can’t help but yell “TAKE IT OFF” when Robbie removes his vest. He cuts eyes and says “You don’t want that” amid scattered laughter.  This is a snapshot of a moment that I love–a band in their element bantering, casual and humorous before the stage thunders again shaking the venue and it’s occupants to the core.

The next song finds Tony on the small banister posing before sliding and jumping to the floor.  and beating away. His enthusiasm behind the gas mask is clearly evident, almost a boyish glee as he cavorts.  There’s a energy and a power in his body and playing that is infectious and electrifying.

“If you’re easily offended,” Robbie warns us, “don’t look at the tv.”  He points with a glowing 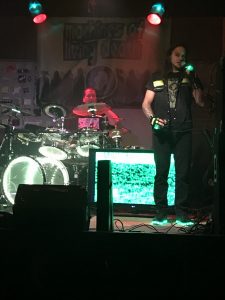 hand, as if we may have missed the enthralling visuals that had been dancing around between the music.

More than one of us knows the set and yells in delighted anticipation prompting his response: “well there it is.”

The next video is equal parts horrific and beautiful as humans are dismembered and decay in front of us. The men provide an intense driving sound track to the video, a chilling interplay.

When the music ends, the venue feels far more empty than it had been, with longer shadows and quieter corners.  There’s a considerable amount of take down to return the venue to normal and I watch as I chat and finish my last drink.  Richmond has turned colder  and I shiver for a moment before Robbie offers his jacket until they finish loading.

It is a good night.

4,729 thoughts on “Machines of Living Death and the Dr. Orphyus Project at McCormack’s Irish Pub”