I can’t tell if the cranberry vodka is one of the best I’ve had because the bartender is just that good, or because I’ve driven two and half hours to get to Hooligan’s.  By the second, I decide he’s just that good. 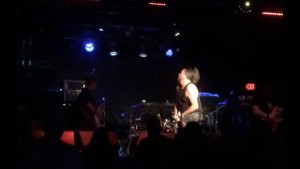 The opener–Death of Uriah–has almost completed their set by the time I arrive.  Disappointing, because I enjoy the energy of their last couple songs and that makes me wish I’d seen more of their set.  At one point, the lead signer yells “this goes out to all the piece of shit junkie losers!”  Someone in the crowd yells back “HEY!  I’m a junkie!” and everyone laughs. It’s the perfect interaction and sets the tone for the rest of the show: bands demanding participation and the crowd enthusiastically giving it.

ONI takes the stage next.  I’m amazed at the sheer number of bodies they can fit up there.  Six men are scattered across a space that minutes before felt full with DoU’s four man set up.  But what really grabs my attention is the synth and
xylophone. 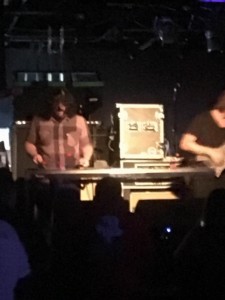 I’m an industrial/electronica girl at heart and they’re suddenly speaking my language–or, growling it.  I am enamored with them and watching the clever interplay between the members of the band.  I’ve never seen someone destroy a xylophone like that and I’ve never seen a more majestic hair flow while head banging than the lead singer managed.

Between sets, I meet a man in the crowd named Jason.  He’s here for Max Cavalera–it’s Jason’s 25th time seeing Max and he’s driven over four hours to Jacksonville, NC for it.  Jason appoints himself my tour guide for the night and tells me everything he can about Sepultura, the Cavalera brothers, and all their side projects.  It’s charming and the earnest way he speaks about Max is equal parts hero worship and a familiarity built from over twenty years of watching a band shift and change.  He has loved every incarnation and is eager to evangelize. 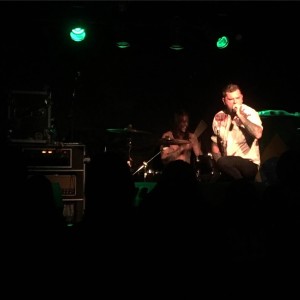 After this, All Hail The Yeti is on.  The two guitar players are like bookends during the
sound check.  They get a little perverted and the crowd eats it up.  I hadn’t noticed before, but the crowd is still small but full of life.  There are two guys who are desperate to mosh and there’s the one guy who dances to everything–even the sound check.

AHTY doesn’t care who’s out there–the lead singer comes out on stage and he looks like he’s chewed through the bars of a cage he’s been in for twelve hours.  He rocks back and forth while they finish up the sound check and then explodes. He looks ridiculously respectable and almost out of place until he opens his mouth to scream–then it’s chaos and I want to break everything. At one point, everyone but the drummer has climbed to the highest point of the stage they can and I wonder if they are going to throw their bodies at us like
they’re assaulting us with their sound.  My new friend yells that he likes this band, and the rest of the crowd is surging around us in agreement. 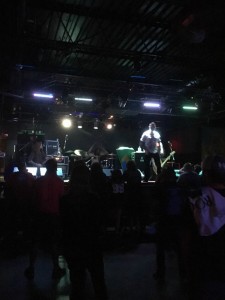 There’s a long intermission after the sound fades away.  I hadn’t yet heard the news that Combichrist (my main reason for coming) dropped off the bill that morning.  Jason points people out on stage, describing members of Sepultura and the Cavalera family like old friends.  Our confusion prompts him to check with the doorman and then give me the bad news.  My disappointment is clear.  Jason reminds me that Max is coming up–but it feels somewhat like finding out your favorite flavor of ice cream isn’t available and being reminded that someone else’s favorite is.

He buys me a drink and we stake out a spot as close to the stage as the barriers will allow.  The crowd is small but restless.  “Are you ready to hear your new favorite band?” Jason asks as the lights go down.  I laugh, because I can’t bear to tell him my heart is already spoken for in the face of his earnest, endearing enthusiasm. 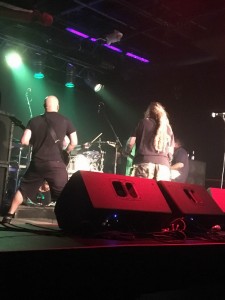 The poster outside Hooligans promised us Roots and the Cavalera brothers deliver
this in excess.  With the first guttural growl of “ROOTS! BLOODY ROOTS!” the crowd erupts into activity, screaming with Max, beating their bodies against each other or against the barriers in front of them, or thrashing wildly in place.  Everything is organized chaos and Sepultura is the lord over it.  They scream, and we scream back to them.  More than 90% of the crowd knows every word, every note, every direction and they respond–the music is an overbearing presence with a will of its own and a driving need to impose that will on everything around it.

This is my favorite thing about metal shows: crowd participation is mandatory.  You cannot just watch, you must participate.  The sound will assault you and the band will direct you.  More than once, Max yells out directions and the pit writhes and conforms to his desires. He directs the pit to circle, and Jason leaves to throw his lot in. When he comes back he uses a shoulder to shove me into the wall and it feels like a greeting–a metal handshake–and I laugh.

I can no longer hear anything that isn’t music; even my own screams are lost in the commotion.  I’m close enough to stage that they can look at me and scream, picking my face out from a sea of others.  It is intoxicating.
There’s a point where Max pauses to play an instrument I don’t recognize (later, I find out it’s a berimbau).  It is haunting and strange in the midst of the driving guitar and thrashing drums. 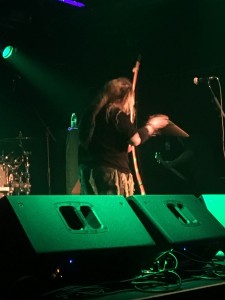 Igor has an intense drum solo that causes the crowd to scream his name and thrash around.  They are all in love and angry and full of fire.  I think that of all the shows I’ve been to, this is the one that I can feel the energy from everyone around me the most.  It is a living, pulsing thing that threatens to devour us all and my God, we are willing to be eaten.

They end with a reprise of Roots–a faster version that feels like an explosion.  It is perfect, circling back around and leaving the crowd desperate for more.  As the roadies start dismantling everything, the crowd begins to disperse.  Jason hugs me and is gone, much like the fading drum beats. 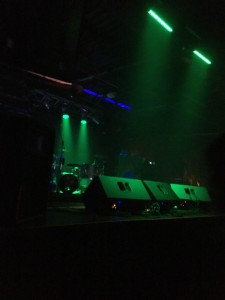 I lean against the wall and pull at the last, watery remains of my drink.  A drunk guy hits on me–“want to go get donuts?” It doesn’t work for him, but I file it away as my second favorite pick up line.

All Hail the Yeti

3,059 thoughts on “Return to Roots at Hooligans Pub & Music Hall”