Every time I walk into The Maywood, I think it should smell like smoke and cedar.  Indoor smoking has been banned in North Carolina for years, but I imagine every cigarette haunts the place. 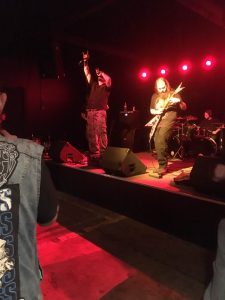 The opener for the night is Origin of Disease.  The lead singer bellows “Are ya’ll ready to hear some fucking metal?” and I feel like I’ve known him all my life.  He’s every good ol’ boy with a dream–albeit with talent as well.  The guitars and drums howl and pound behind him weaving a backdrop against which he paces.  He wraps the cord from the microphone around his forearm, as if he’s physically leashing himself to the sound.  During the last song, he jumps off stage and screams at thr crowd from their level.  I laugh, because it is perfect.

They’re a fantastic opener, getting the crowd riled up and ready for the night.  We’ve been promised brutality, and we are ready for it.  I think the venue is haunted by every song that’s been played here and the ghosts are restless weaving among the sounds and bodies. 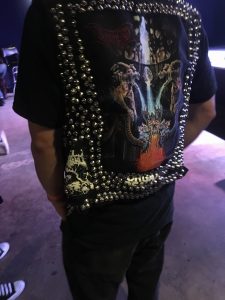 Next on stage is Pathogenesis.  “We’re just here because we wanted to see Malevolent Creation,” they joke, referencing a band who’d broken up the weekend before.  With perfect timing, the drummer lets off a rimshot.  Each song looks and sounds like a demon being exorcised from the lead singer–he writhed and convulsed between the guitar players and the drummer, every word wrest out of him.  The banter of their set continues as he announces a song as ‘about doing unrecommendable shit.’ When they leave the stage, they are spent, exhausted, and triumphant.

I’m really here for Necrocosm–an ex-coworker-turned-friend plays guitar and I’ve been trying to get out to see them for several months.  We chat between sets and he grows more excited as the night progresses.  His excitement is absolutely infectious. 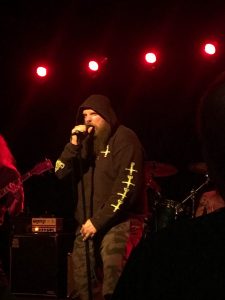 He tells me I’ll like the next band, Deathcrown.  One member has a shirt that says “old school death metal” and they deliver on that promise with a fast, hard set that washes over the crowd in waves. The lead singer pulls his hoodie down over his face, glaring out from under it.  He must be hot, but the effect is worth it as he glowers and head bangs.  Despite a bit of a cold, he sounds amazing and entices the crowd to thrash in front of him.

There’s a longer pause before Necrocosm.  I always enjoy watching the guys climb all over the stage and dismantle one kit as another comes into play.  It reminds me of watching someone put a puzzle together–everything falling into the correct place as they bustle around. 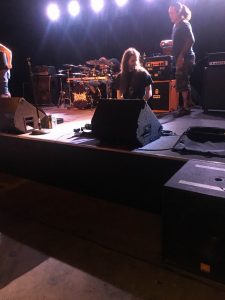 The crowd is anxious for the brutality they’ve been promised.  Every set has lead to this one, growing progressively harder and aggressive.  I’ve learned that I don’t enjoy the pit itself so much as I enjoy the very edges so I scan the crowd, picking out the most restless to watch.

The lights drop and there’s a unsettling sort of music before a harsh tap-tap-BOOM.  The crowd is into it from the first note–pressing against the stage and reaching out to the musicians in front of them as if they want to be pulled up and welcomed onto the stage.  Dramatic rises and falls in the music entice everyone to movement.  Behind the row of bodies against the stage there’s a pit forming.

The lead singer looks like he’s ten feet tall and I try to decide if he looks more like a statue or a twisted preacher reminding his congregation to keep sinning. He reaches out to us and we react, rolling and thrashing.  A guy in the center shoves and laughs.  He is in his element and everyone around him sweats and shoves back. 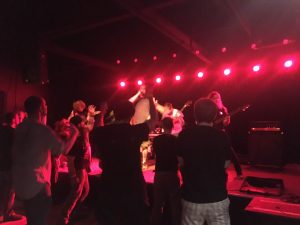 “One more,” they tell the crowd in front of them.  “You got energy for one more?”

The pit knows it’s their last chance and they all become animals, driven by the music. There is more motion and activity than ever, boiling over and around the floor.  The music has created a monster and it revels in itself.

Tomorrow, we will be respectable again.  I will convince someone to sell me a house.  You will go to work.  He will feed his cat. They will take their daughter to soccer. But tonight, we are all animals.

4,299 thoughts on “Necrocosm at The Maywood”