The crowd is a mixed group, fitting the eclectic Motorco. I expect one woman to pull knitting out of her bag at any moment and I see another who looks as if she’s been delicately plucked form the 80’s an installed here as an art piece. Each one of us is distinct and it speaks to the wide appeal of the bands that will play for us. Humans mingle, filling their hands with drinks and their voices with anticipation.

A friend is there to see Roseclouds and she introduces me to the boys. I look at Ryan for long minutes before it dawn on us; we stood under the awning at Fallout a month ago watching it rain and waiting for the doors to give us refuge from the elements. Threads connect, drawing a small scene closer together.

I’m startled out of a sentence by a burst of sound from the front of the stage. I turn, and look. 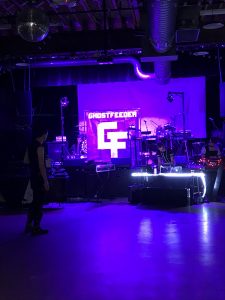 Perched behind laptops and keys, amidst strings of led lights, Tescon Pol begins. There’s a low drone that reminds me of bees caught in a crashing wave. It ebbs and flows through the venue undulating around the collected bodies before them. It’s a pulsing hum that persists through song connecting and weaving them together. I feel like I’m being torn away from the shore of reality by the rip tide they’ve created.

Both Mic and Ariel preform with heads tucked in as if the rest of us do not exist and the sound alone carries their set. As they play, Raymond Watts the Lord of Lard himself wanders the floor, taking in his congregants as we listen. He stops, closer to the musicians than the crowd and nods, looking pleased. 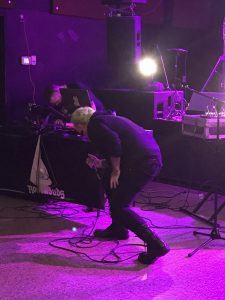 Roseclouds is next–holding sway in a minor key, Ryan deftly working his machinery while Micah howls and growls. He paces, seeming torn apart by his lyrics as they erupt from him.He bends a knee as he screams as if the sheer weight of the noise he’s requiring of himself is too much to bear. Ryan pulses, as if the machinery he touches is the only thing holding him here, else he’s yanked purely out of the reality we all inhabit.

I enjoy this set immensely, the rise and fall of the songs matching their bodies, each drug along by the other completing a cycle of motion and sound.

I speak to Tescon Pol after their set and Mic tells me they record everything. They’ve lost this show due to a freak accident and I revel in the analog nature of hearing a thing that only the people in attendance will experience. Mic repeats a thought that I will hear echoed throughout Motorco during the night–a feeling of excitement at meeting musical heroes and opening for them.

There’s a longer break, enough time to find another set of friends and make more introductions. I try to keep count of all the musicians and all the bands I see and am left with a swirl of names as I force my phone into people’s hands to find themselves on social media and connect. There is a deep sense of community and I feel it thread around all of us, pulling ever tighter. Another friend says she’s never seen me this happy and I laugh because this is why. The pulsing heartbeat of the scene supporting it self is life giving. 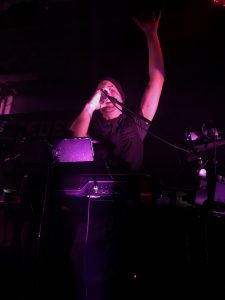 Ghostfeeder has the best sound check, Derek belting out “check check mic check” before laughing. His voice matches his boyish charm being equal parts playful and determined, and thoroughly infectious with the joy of the sound he makes.

The first song finds him reaching his arms out and beckoning us closer and closer saying he wants to see our beautiful faces. I find myself close enough to reach out and touch him, my favorite position. He and Mark are alternately shrouded and revealed by a smoke machine, causing puffs to billow around their legs and into the crowd. Mark concentrates, funneling his passion and energy through his hands in intense bursts.

Derek’s movement flows with his voice, crisp like opening an ice cold beer. We accept it and scream out appreciation for the performance. I find myself longing to know every word and sing them in response to his joy. He picks at his keyboard and I remember a long dormant affection for boys who play piano.

There is a man screaming HELL YEAH at every song and when I exclaim that “I LOVE HELL YEAH GUY” another woman touches my shoulder and agrees. He is the spontaneous reaction to the passion the band forces upon us.

I love Hell Yeah Guy because he reflects me and my current enthrallment. 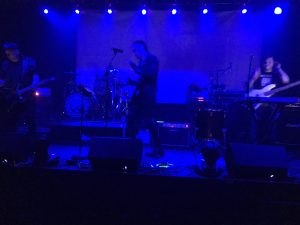 Julien-K fills the stage with guitar riffs and sound. Ryan looks like he and Mad Max could be brothers attacking both the mic and guitar as if they hold water or gas. 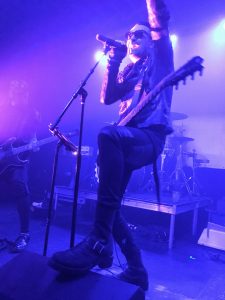 They again beckon us forward to breathe the air they fill with sound. Ryan is expressive as he sings in away that resonates, pulling you into his fantasy of sound and leather. He is sound and light in rose shaded light, adding to the 80’s illusion around him. He moves in sharp angles, filling the space slotted for his body and demanding more of it from his band mates.

My spot is stage left, posted up between Ryan and Bidi Cobra watching with rapt attention as the ply their trades, Bidi at one point with his guitar, vocals, and a drum. It’s a whirl of activity and sound that finds me screaming for more.

At the end of a song, Ryan reaches out for a high five and I return it, laughing. We clasp hands for a moment and I am on top of the world, drunk and spinning again into the music.

They finish with Blue Monday, of course, the entire venue howling along, every word louder than the last.  It’s the perfect capstone to the high energy they’ve provided us all night. 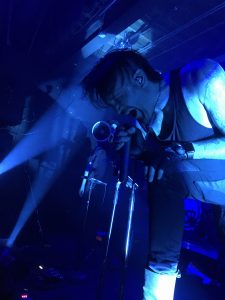 Between sets, I wander towards the merch tables and bar. The drinks are strong and I order a final vodka cranberry as I mingle, demanding selfies and smiles from anyone who will look my way. I fangirl too much and fall over myself in my excitement, keenly aware of my ridiculousness.

When an artist preforms for you, they give you a piece of themselves. A sliver of their existence that is now yours and yours alone. I reflect this back in my gratitude and excitement, breathing in joy.

I linger too long and then as Pig‘s set begins, I find myself distracted by Ghostfeeder and Julien-K singing and dancing to Diamond Sinners. It is a glimpse behind a curtain–a swift glimpse because I have a desperate need to be near the stage.

Raymond Watts is a beast, a monster, a sort of fairy tale dragon. Enveloped by the silver fringed jacket that has become ubiquitous of this tour, his already tall form seems to loom a hundred feet above us. I have a bit of dissonance, my mind trying to reconcile the soft spoken man who layered a fake southern accent over his British singsong during the meet and greet. 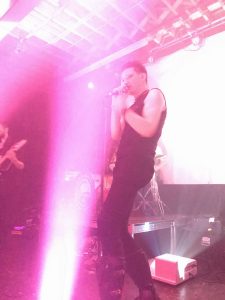 The silver fringe forms wings off his arms, glittering in the stage lighting to perfect effect as he throws his arms wide, demanding our worship. And as the Lord of Lard demands, we provide. Lyrics become liturgies, chanted along as one desperate voice, reaching upwards.

If I were not previously a disciple, this would find me entrapped as such. I find myself screaming for reasons I do not fully understand from long dormant places in my soul.

Raymond laughs and curses between songs, a connoisseur of the intonation of ‘fuck’ turning the word from an exclamation to a description and back again.

“Truth is sin,” he sings, and we return the sentiment worked into a fervor by the man and pumping our fists in the air in time with the bold face words projected behind him. He points a long accusatory finger. “TRUTH. IS. SIN.”

There is a moment in every show where I feel as if I no longer exist as music and sound and pork fills the void of where I was. I feel transformed and wholly transposed by the power of the show in front of me. I hit that moment and am nearly gone when a friend get my attention and 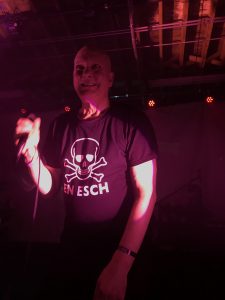 I am corporeal again.

Before me, En Esch is wearing a shirt with his name on it–and I feel I will never be that cool in my life. He points the mic into the crows and finds her–she sings, her heart pouring out. She is perfect for the role he pushes on her.

I can’t help but find my eyes drawn to Raymond. The stage is full of humanity and personality but he alone stands above demanding the eyes. And yet…he points and directs us to En Esch and Zmarr and the other men in turn as they produce what sounds are needed to propel the the Lord of Lard to the heights he requires.

Juke Joint Jezebel, Wrecked, Prey and Obey, Cult of Chaos…these and many more flow through the venue.  The set feels mythically long, stretched across a career of decades and more than one band.  One begins to have the feeling that the night will last forever, as we’ve often hoped. 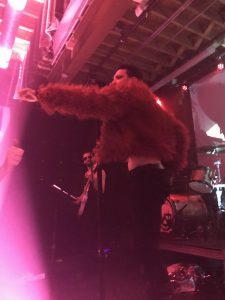 Viva Evil is the last song–and yet.

Our supplication draws him back to us, wrapped in red fur as if it will protect him from our a desperation to reach out and become part of the show. Raymond Watts is the center price of a feast the includes all five men before us.

I spend far too long after the show expressing my affection for the red furry jacket Raymond is still wearing and remove myself to watch, resting on the bar.  From here, I can see roadies and sundry band members stripping the stage like the most efficient of piranhas.  They pack the remnants of the night into large black boxes, waiting there for the next time these instruments of light and sound will be called on to provide their services.  And I find myself looking wistfully at the emptying space, echoes already fading.

It is a perfect show and I knew even then my voice would be gone for the next day.  This is a fitting sacrifice I think, as I find my way back to what passes for reality. 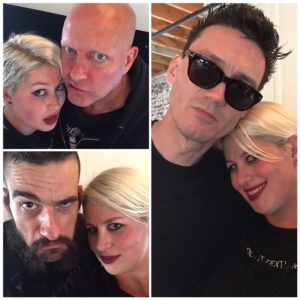 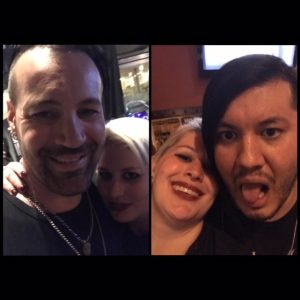 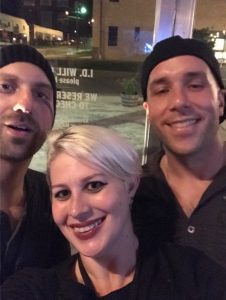